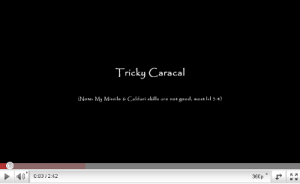 Back when I first started making videos I had an idea for a "Anti-Frig" Caracal. I think the idea occured to me when I was camping some drag bubbles on a highsec gate with a rifter and a caracal came in and killed me.

Back when I filmed this my missile skills were really bad, in fact I think most were level 3 with a couple at level 4.

Since then I've went back and level fived a lot of those skills. I may do a sequel at some point since I still have the same caracal used in the video.

I don't recall the exact fit, but basically I used assault missile launchers + ballistic controls + dual webs + rigs that increase missile damage on small targets. The result is a ship that just shreds frigates, especially if you have decent skills.

Watch in 720p for best quality