Tanking as a Solo PVP Tactic 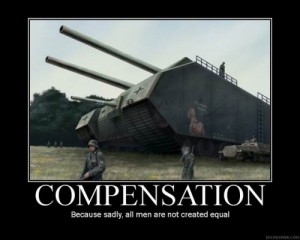 Moments ago I was replying to post over at the EVE Online Forum asking if it was possible to learn PVP in Big ships like Battleships and Battlecruisers.

You probably know that my typical advice to those wanting to learn is to start with Frigates. The stuff you learn in them will help you with every ship in the game and they are cheap so you can afford lots of "lessons."

This guy however has a few billion ISK to spare and doesn't care for frigates, so I told him how to solo PVP with Battleships fairly cheaply using tank as the disengage tactic.

The Ability to Disengage is CRUCIAL to solo PVP. Chances are you will be blobbed in most fights and you need to be able to escape when it's unfavorable.

Frigates do this with speed, dual propulsion, kiting, and by isolating very well. But for most big ships that's not an option because unless you're in a Macherial, you'll likely be one of the slowest ships of the field.

That's where tanking comes in...

There are two basic tanking strategies:

Alone these strategies do well in many types of encounters, however to be able to disengage you MUST fight on a Gate or Station!

To be successful in Solo PVP you need to always expect to be blobbed (you will be right 90% of the time). Therefor you must plan for it and have a counter.

The one used here is docking or  jumping through a gate after the Aggro Timer has expired.

What is the Aggro Timer? It's a hidden timer in the game that starts counting 1 minute every time you commit an aggressive act on another player. This includes warp scrambling, webbing, ewar, shooting, drones, etc. Each time you aggro your timer is reset to 1 minute. During that minute you cannot jump or dock.

So the trick here is knowing when to "De-Aggro" (stop aggressing) in order to have time to allow the timer to expire and escape. You really need to think about this ahead of time and throughout the fight because it is your most important decision.

You warp to a gate with 3 Battlecruisers in your Buffer Tanked Abaddon (200,000+ EHP) and begin engaging them. They think they can win because they have 3 times as many ships as you and shoot back. Moments later you destroy one BC and move to the next.

BUT then Directional Scan shows incoming. It looks like 8 more BC's are on the way. You immediately stop aggroing and orbit the gate at 500m (to avoid being bumped).

The hostile fleet lands and you spam jump as your Armor begins to melt... 90%, 80%, 50%, 30% then you finally jump and escape on the other side because they focused everything on one side instead of covering both sides.

The key here is knowing when to disengage, which takes some practice and planning.

Go out and give this a try and see how you like it, it can be very fun and in many cases the fact that fights happen slower than with frigates means you will have more time to make decisions.

4 thoughts on “Tanking as a Solo PVP Tactic”