Run For The Roids (Tackle Evasion)

A few weeks ago I was roaming around in my tackle interceptor looking for a ratter to tackle when I found a ratting Tengu in a belt. I tackled him and then called for backup which was 5 jumps away and not ready.

Usually I can tackle a Tengu permanently or at least for a very long time, and I needed to in this case because it would take 5-10 minutes before secondary tackle arrived.

While waiting for my fleet I did the normal orbit, then to reduce DPS I widened my orbit slightly so that my ships speed would increase and the incoming damage would decrease marginally.  Then I very selectively overloaded my MWD for a cycle when my shields dropped below 50%.

All was good until a volley of missiles hit and I dropped into structure. Unsure of what was happening I checked my speed and noticed I was moving at less than 100 m/s, MWD on, and stuck on a asteroid! I had to do something quick or the next volley would kill me... 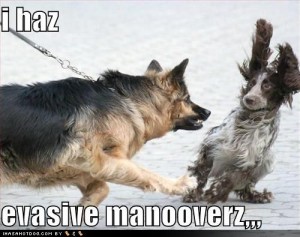 So I quickly overheated my MWD and manually flew away from the asteroid and for a short moment lost my point. Once I had cleared the asteroids I reset my orbit to avoid hitting more 'roids and left the MWD on overload because I was still struggling to survive.

I was prepared to die to get the kill...

Incoming secondary tackle notified me they were about to jump in so I did everything I could to stay alive. Then right as my MWD burnt out, I heard "POINT" and was able to warp away in structure with a dead MWD.

Moments later the rest of the fleet arrived and finished the Tengu off. The kill was worth well over 1 billion ISK and he dropped some faction Ballistic Controls and Shield Mods that were worth a lot of ISK.

If you get tackled in a belt by an interceptor or other speed tanked ship and have no chance of escaping, you should consider running into the asteroids. Go in deep and try to bounce the inty off an asteroid.

Once a interceptor stops moving and still has it's MWD on it becomes a massive non moving target with almost no hit points and VERY easy to kill.

But that's not the only way to "shake" a tackle. You can also slingshot a interceptor so that he loses point for a few seconds...

To do this you should first find a warpable object in space, then manually MWD in the oppisite direction for about 5-10 seconds, then hit overload on your MWD and before it actually overloads turn and align to the warpable. Now with MWD overloaded, spam your warp button. This should make the inty overshoot his orbit and lose point temporarily.

If you do it right, and if the interceptor pilot doesn't see whats happening, you have a good chance of escaping.

One thought on “Run For The Roids (Tackle Evasion)”