Return of the Nano Cane? A Comparison Pre and Post Vanguard

I've always been a big fan of Battlecruisers. They have historically been one of the most well rounded ships in the game. A ship that was flexible enough to handle whatever situation you got into.

That was until a few years ago when the first Nerfs hit along side some serious buffs to Cruisers. Quickly EVE went from "Battlecruisers Online" to "Cruisers Online."

Follow that with the new T3 Strategic Destroyers and Battlecruisers almost disappeared from the game.

In fact, I very rarely see them at all anymore in Low or Null Sec. Even pirates in Low Sec switched from Battlecruisers to Cruisers for gate camps!

What upset me the most about the BC Nerf was the way they tried to turn the Hurricane into a Armor Tank. As a Minmatar ship it could do both, but my favorite fit was the Shield Nano Cane with Autocannons and later on Artillery.

While my Shield Fit and Tactics survived the nerf, the ship was never the same again and I found my self not wanting to fly it anymore.

With the release of Vanguard a few days ago, which gave all the Battlecruisers a Buff, I'm curious just how much has changed?

Is the Shield Cane back as a Solo Champion?

To find out I decided to do a side by side comparison. Pre-Vanguard and Post-Vanguard.

Both are with the same fitting (except MWD for PG), pilot, and implants. 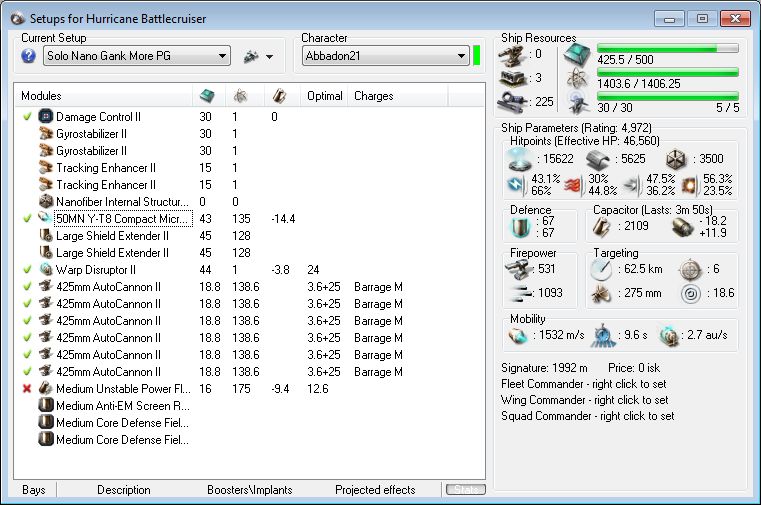 The Side By Side Stats:

We see that just about every important stat for the Nano Cane has improved. While shields improved only slightly, other more important stats like Speed and Agility improved by very noticeable amounts.

That extra 139 m/s maybe not seem like a big deal but when you're overloading and burning away from a blob it makes a massive difference in what is able to keep up with you and keep DPS on you. The added agility means you get up to speed faster than ever before, which as a side effect helps you crash gates when needed.

Probably the most noticeable difference is the Gun Range. Since effective DPS is actually Optimal + Falloff = 50% of Maximum, the further out you push that stat the more DPS you will do to your target.

The Nano Cane's engagement range is between 15km and 40km, so you are in Falloff 99% of the time. This means that your new range bonus will effectively boost your DPS output by 50-100DPS in most cases. A hidden benefit that doesn't show up in the raw stats.

I can safely conclude that the Nano Cane is back!!! And quite frankly it is a fantastic counter to the plague of Tactical Destroyers currently ruling the EVE Universe. Straight Line Fight, let them chase and punish them as they approach. If they get to close, you neut, if they run you turn in and approach.

I want to look into using a MJD, however those tend to work better of Armor and Structure Tanks since it uses a mid slot. But I'm not ruling it out.

I will be updating The Hurricane Guide with new footage, fittings, and tactics in the next few months. Get a head start and get it today! Click here to get The Hurricane Guide. All the Tactics I used in the original Videos will work better now than they did when I made the videos!

Stay tuned for some fits and more info...

5 thoughts on “Return of the Nano Cane? A Comparison Pre and Post Vanguard”