In the past I have run Combat Sites off and on, usually with my Alliance as a way to pass time in between fights and make some ISK. However, recently I have been running them more often so I could make this Article and Video about the PVE Ishtar.

I can't say exactly how much ISK can be made running Combat Sites in Null Sec because it depends on things like how many players, ship types, what sites you find, drop rates, etc. BUT, I tend to make at least 200 million ISK and hour when I do it. That includes the times I get a great drop and walk away with over 1 billion ISK from a single Combat Site (Vindicator BPC, Overseers Effects, and Core-B Type Mods).

I live in Syndicate NPC Null Sec and the Combat Sites and Rats there are Serpentis. Gallanete, being enemies of Serpentis, has built in resists to Serpentis Damage Type (Kinetic Primary, Thermal Secondary) on many of it's Tech 2 Ships and most notably to it's Heavy Assault Cruisers.

Because of this high Natural Resist to Kinetic and Thermal Damage, the Ishtar is very well suited to fighting Serpentis Rats. But that's not the only reason for it's Awesomeness. The Ishtar get's A LOT of Drone Bonuses, everything from Damage, to Tracking Speed, to Range, and more. This means the Ishtar can drop Warden II's (Kinetic Damage) and project damage out to 100km while doing well over 500 DPS at that range!

If you've ever run missions, you know how important Damage Projection is. It's much faster to clear a room when you can hit every target without moving than if you had to burn to each target to shoot it (ex: Blaster Deimos). The fact that you can move damage from one target to another instantly increases your effective DPS Output by a large amount.

The fit I have built is a Afterburner, Shield Buffer, Passive Recharge Tank. Which means that it survives by having a passive tank and by staying moving so NPC Battleships can't hit it very well.

The guns are an afterthought that are added just because there's a spot for them. They increase DPS marginally, but have range and tracking limitations. 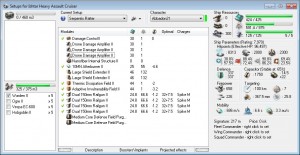 I also made a Video where I discuss and show my self flying the Ishtar in a Serpentis Prison Camp where there is a good chance of a Vindicator Blueprint drop at the end. Unfortunately I only made about 300 million ISK from this Prison Camp and it took me less than 2 hours Solo.

I recommend that you run these Combat sites in teams of 2 to 5 players for maximum speed, safety, and for someone to talk to so you don't bore your self to death.

One thought on “PVE Ishtar Fit for Serpentis Combat Sites”