Mechanics Monday: Why Looking Weak Gets You More Kills In EVE

One of my favorite parts of EVE is the ability to use Misdirection as a tactic in so many situations. One tactic I use all the time is to act as if I'm running from an enemy fleet to get away, when my real intention is to separate them so I can get kills.

But in this article we are going to talk about how you can use your ship choice as a way to get people to make mistakes, over extend themselves, and get you kills.

If you've purchased my very popular Frigate PRO Guide yet, you know what I'm talking about based on my Raptor Guide. In that guide you learn that because people see the Raptor as a "bad" ship (and even call it the Craptor), they are more likely to attack it alone and put them selves at risk. This makes getting kills very easy for a Raptor pilot.

Compare that to someone flying a Taranis and you see how much it contrasts. If you fly a Taranis, it is nearly impossible to get any other interceptor to fight you solo. You have to make them think they can blob you to get them to fight you (I teach you how to do that in the Frigate PRO Guide). This means you have to work harder to get fights in the Taranis than you do in the Raptor.

To illustrate my point we are going to design a a new setup for a ship right here to make use of this tactic...

The key here is to think about it from your opponents point of view and ask your self "What would I do if I saw this ship in a belt/at a gate/etc?"

First let's pick a target for our ship based on known player behavior. One pretty common behavior is the use of Frigate/Interceptors as scouts and lead tacklers for fleets. Most fleets send 1 or 2 frigates ahead of them to look around and try to get tackles.

The time between when they get tackle and when their fleet arrives gives you an ideal isolation of at least 30 seconds. That means our ship needs to be something that a frigate tackler will feel comfortable tackling and can kill 1 or 2 tacklers and warp away in less than 30 seconds. We also need to keep in mind that fast tacklers can disengage very quickly, which means that killing them fast before they can run will get more kills here.

The need for high speed kills here points us toward Artillery as our weapon of choice and ideally a Thrasher as our ship. In the past an Arty Thrasher worked very well here, something like this: 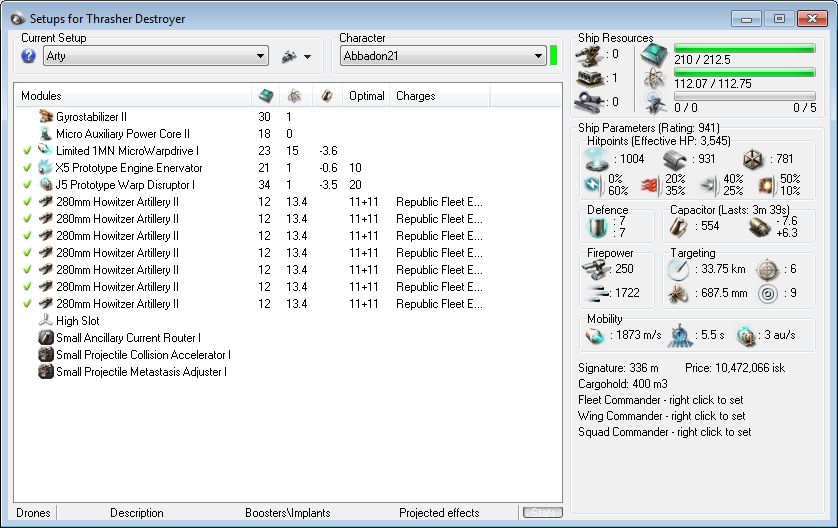 BUT the problem with the Thrasher is that interceptors are already scared of it for this very reason. So we need to find another less intimidating ship that a tackler will be less afraid to engage. The choices here are really limitless, but a Tech 1 Cruisers seems like a good choice.

In fact, I did this same thing with my "Tricky Caracal Video" a long time ago. But for this let's try something else... A Rupture!

The Rupture is a capable ship, so it's not quite as weak as I would like, however it doesn't stand much chance against most the "blobbing" fleets you see in EVE today and most tacklers would feel comfortable pointing one.

I wanted to use Artillery here but the Arty just won't track an Inty at 15-20km no matter what you do. So I had to go with Autocannons. 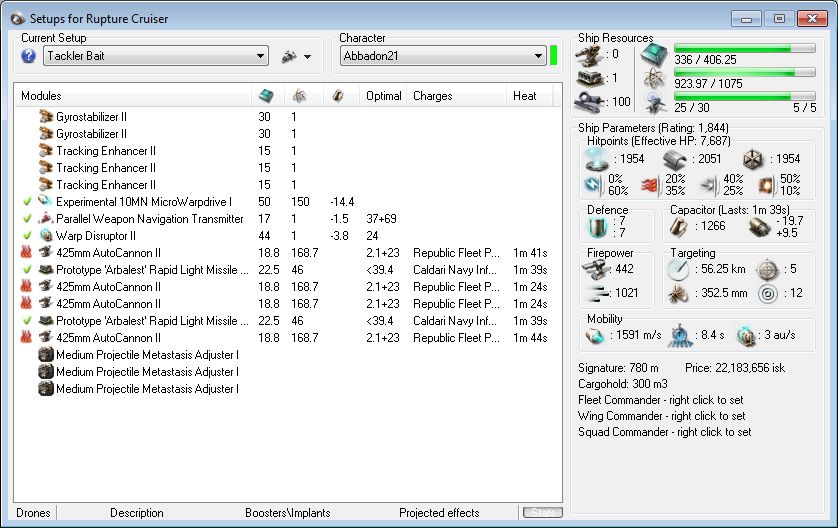 As you can see the Alpha is still pretty decent and the DPS is enough to kill most interceptors in less than 15 seconds if you overheat the entire time. Your main threat is being tackled by a larger ship or perhaps even an frigate that gets in and orbits fast at 500m. To counter that I have included ECM Drones as an "Escape Mechanism" for when things go bad.

As you can see pre-planning and anticipating how opponents will respond to you can give you a very big advantage. Leave some comments with your killmails if you decide to try this and have fun!

7 thoughts on “Mechanics Monday: Why Looking Weak Gets You More Kills In EVE”