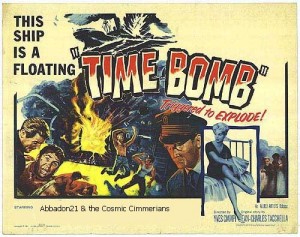 Most of my EVE Career has been spent fighting outnumbered. First as a PVPer in an Industrial Alliance fighting off a large Pirate Alliance, then as a small group of PVPers living in IT (BOB) Space outnumbered 100 to 1 most the time, and finally against Test and Goons 10k members.

To survive against massive numbers like this you have to find ways to leverage what you have. One fun way to do that is with "Ambush Tactics."

At it's most simple this is something like we would do when Test would camp our Station with 20-50 pilots. Usually we only had 5-10 players online so we had to be creative.

The solution was Bombs! We would get one of our guys to undock and get them aggroed, then we would use some creative bookmarks to do a bombing run while they were all aggroed.

We would let the bombs loose, our bait would dock, and then we would watch as the enemy fleet melted to our bombs.

You can take this a step further by luring a enemy fleet into a trap.

Think about it, if you're a blob chasing an easy kill (a non cloaky Tengu or something) and it makes a obvious warp to a planet, would you have your fleet follow it?

Now what if that Tengu actually warped to a Safe Spot 300km off the warp in to the planet and there was a Mobile Warp Disruptor Bubble anchored at Zero?

The Tengu bait would land safely off bubble while the entire enemy fleet would land in the bubble (even if they warp to 100).

Now what if there were 8 Bombers sitting there ready to bomb? And they released bombs the moment the first enemy came out of warp?

BOOOOOM!!! is what will happen!

You would have forced a very large fleet of "fish" into a tight little barrel and then blown it up with dynamite. Much better than shooting fish in a barrel!

In this example, the larger your enemies fleet, the better, because more ships mean more kills for you.

This is just one of the many ways you can fight out numbered and still embarrass large blobs!