I Found You… The Insta Probe Tactic

So you think you are good at camping Gates? Stations?

The best way to describe this tactic is probably with some examples. So here we go...

Let's say you're flying a Vagabond and you jump into a system that's camped. You wait a few moments then warp to a pre-made safe spot 300km above the gate to analyse their fleet for weaknesses to exploit for kills.

But whats this? Within 30 seconds of landing at your spot their entire fleet warps up bubbles and webs you. You try to run but it's too late... You are all kinds of dead. 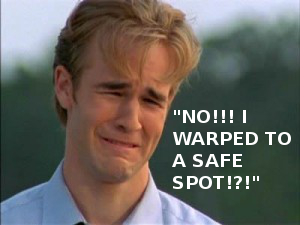 You're leaving null sec headed back to high sec when you come to the last null sec system before high sec. There are 20 people in local and no station, so you think there's probably a camp and/or drag bubble on the high sec gate.

Being a smart pilot who regularly visits EVE PRO Guides you know that you should never warp gate to gate in null sec when there are other pilots in local. So you warp to a tactical safe spot 300km above the outbound gate to avoid any bubbles.

You land and sure enough there are 20 pilots and a several bubbles on the gate. You stop to consider making a run down to gate and sneaking through when all of a sudden a stealth bomber uncloaks beside you and points + webs you.

You try to pop him quickly before his fleet can warp up to you but a Falcon also uncloaked 50km from you and has you perma jammed.

The enemy fleet lands and you kiss your ship and pod good bye!

You are being camped into your home station by some blob. Again being a smart pilot who visits EVEProGuides.com often, you have already setup an "Insta Undock" spot that is straight out from the undock 400km. (Click Here to read Zimmo's article about surviving station camps)

You undock and wait until  your session has 5 seconds left (so you can redock if they catch you) then warp to your insta undock.

You sit there 300km from them laughing when an inty lands on top of you and points you. OOPS...

But WTF! How did all of this happen?

It happened because of Insta Probes which should be a part of every camp. Any campers not using them are losing kills in fact.

99% of the time your enemy will not use this tactic. But they and you should use it.

Here's how to do it:

Get your self a probe ship and have him put out sisters combat probes in a diamond pattern 0.5 AU around the gate/station. Then simply have him run his scan the moment a ship lands in a tactical spot (even a few seconds before they land is good).

Your prober would have already "ignored" the results of all the fleets ships so there will be only one result and because of the scan strength and 0.5 AU range you will be guaranteed to get a 100% scan every time.

I believe a scan takes 30 seconds so you can get a warp in within 30 seconds every single time!

Now to go one step further you need to work on how you will tackle. If your opponent sees your entire fleet warping to him he will likely be aligned and hit warp.

Perhaps a better way is to have a designated Stealth Bomber (no lock delay on uncloak) and a Falcon (to keep stealth alive) in a squad with the probing character.  Now just warp your stealth up at zero and your Falcon at 50km or whatever and then have your stealth uncloak and insta point the target before bringing in the fleet.

How to evade this tactic:

Simple... Put probes on your overview so that you can see them on scan! Whenever you are jumping into a camp, warping to tactical, or whatever you just run your scanner and if you see probes, you know what they are up to and you move before they can grab you!

Fun stuff right? Like I said most people don't do this and it costs them a lot of kills.

4 thoughts on “I Found You… The Insta Probe Tactic”