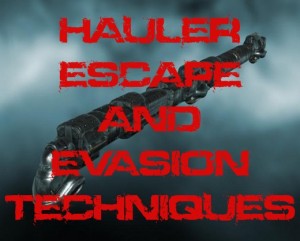 Flying a Hauler through high sec with almost a billion ISK in stuff can be risky on it's own much less trying to make your way though both low sec and null sec. But I routinely do just that in both my Deep Space Transport and Blockade Runner Transport Industrial ships.

Although I have lost a few empty Blockade Runners to camps because I was too lazy to go the safe route (long route), I have never lost a hauler filled with anything valuable.

The reason for this is because I use a combination of tricks and general survival skills learned from PVP.

First is the Cloak + MWD Warp Trick. This trick allows you to only be uncloaked for a millisecond before warping, which makes tackle almost impossible without a bubble.

The next escape trick is to charge the gate cloaked and jump away to safety. The opposite is also possible but more risky... To cloak and move away from the gate.

Finally, there is the MJD escape which requires a Deep Space Transport to perform because T1 Haulers cannot fit Micro Jump Drives.

In this video you will see me demonstrate the Cloak MWD Warp Trick (I know not perfectly, it takes some finesse) and then jump into a camp with a Interdictor and all kinds of tackle and demonstrate the escape technique.

P.S. I just made a new Intro for my videos, what do you think about?

2 thoughts on “Hauler Escape and Evasion and MWD Cloak Trick”