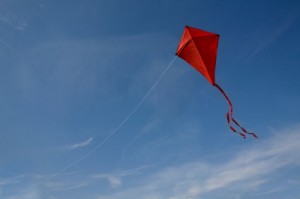 In EVE most tactics can be broken down into two types, Brawling or Kiting. Brawling is pretty simple, you go in close and you brawl until the end. There is little chance of disengaging should things go bad.

Kiting on the other hand is much more focused on maneuvering and the ability to disengage. If you want to fly solo or even small gang, Kiting is something you will need to master.

The reason it's so important is that it allows you to fight out numbered by out maneuvering your targets and getting them to make mistakes that you can exploit.

But before we go any further let's clearly define Kiting...

When you think of Kiting, imagine your target(s) flying a kite that circles them over and over. You are that kite.

When Kiting you orbit your target outside scram and web range. You can also Kite weapons from within scram and web range by retaining the ability to dictate range even while scrammed and webbed but still staying beyond the range of their guns.

In a Vagabond kiting could mean a 20km orbit, in a Tornado it could mean a 40km orbit, but either way the goal is the same, to remain in a position that allows you to both avoid close range damage, and most importantly giving you the option to disengage should things go bad.

In Solo PVP the most important factor to success is quite possibly having a strong ability to disengage. Sometimes that means kiting and sometimes that simply means jumping or docking.

When flying solo you should expect that every fight you have will end with you getting blobbed and plan accordingly. In EVE fair fights are the exception and rare. Most fights are in fact very unfair and it's your job to make them unfair for your opponent.

Those are the basics but don't let them confine your tactics.

Expand on this concept by varying your tactics based on situations. There are times when it will be worth it to go in closer for high DPS and there are times when you are better off expanding your orbit to 100km or more in order to draw targets away from the blob.

In the case of a 1-vs-1 you would kite to both avoid damage and retain the ability to disengage.

In the case of a 1-vs-blob you would kite at a distance and attempt to draw targets off the main blob so you can drop them while also retaining the ability to disengage.

When fighting blobs use harassment to encourage mistakes. Harass them until they make a mistake and give you an opportunity. Stay patient and let them make the mistakes.