Note: What follows is Day 3 of my account of EVE Vegas. Much has been forgotten because of too much alcohol and too little sleep. And much will be omitted due to the “What happens in Vegas stays in Vegas” Rule.

My alarm went off at 9am. I had previously set it for 8:30 but thankfully changed my mind.

Strangely, despite the fact that I had only gotten about 4 hours of sleep, I jumped out of bed with ease and made my way to the bathroom to get ready for EVE Vegas check in which started at 9am.

Dehydrated from the heavy drinking the night before, I decided it was best to find some kind of fluids. My first thought was to go to the Sports Deli and get a fountain drink, since they have free refills and I could be certain to quench my thirst.

When I arrived at the Sports Deli they had a breakfast menu out and I could see them cooking breakfast on the grill and griddle. It looked good so I ordered something called a "QB" which is ham, eggs, cheese, and some potatoes.

Wrong! It tasted like cardboard, $14 dollars of bland cardboard. Evidently they are against adding any fat or flavor to their foods.

I forced almost half of it down while watching football (it was noon back on the east coast and the Gators were playing) then threw the rest away.

Now it was time to find the conference area where I could check in and get my Battleship model. The signs were easy enough to follow but they never ended, just one long hallway after another for what seemed like a mile.

Finally, at the end of my trek I started to see Space Bros carrying bags filled with Battleships, and just past them a desk with people at it.

I approached the desk, ticket in hand and was given the choice of a Tempest or Apocalypse. I had wanted the Megathron but evidently they didn't even bring those. So I settled for the tempest since it looks more like a spaceship and not a futuristic laser rifle.

After getting the battleship I was given a T-shirt for EVE Vegas 2013 and some coupons for in game shirts and Dust suits.

Swag in hand I decided to go drop it at the room and see if Astro had woke up yet before attending any talks.

When I got to the room Astro was ready to leave, so I dropped my loot and we headed back to walk the never ending hallways.

Talking on the way down, Astro informed me that Chubs and Shaz had stayed up all night drinking and were among the first in line to check in with beers in hand. After checking in at 9am they evidently went back to their room to pass out and were not seen again until about 5pm.

Once Astro had gotten his loot, we headed for the large conference room and found 2 others in our group.

The first talk we heard was about doing Exploration Combat Sites in Null Sec to make ISK. Evidently this guy had worked out that the best way to do it was with two faction / plex fit Sin Black Ops Battleships and a Proteus on 3 accounts.

The process was simple... Fit for the exact resists of the rats, use the right damage, find sites with the Proteus, covert cyno in the RR Sins, run the site, and cloak up. This avoided camps because the Black Ops always jumped through the cyno and not gates.

It was an interesting idea and I see no reason why it wouldn't pull in the stated 1 billion ISK per night when put to use.

Next up was the big Announcement Talk about the new Rubicon Expansion. 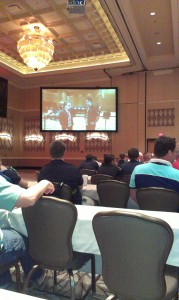 This really didn't reveal much but between this talk and some later questioning of the Devs I was able to determine with a moderate amount of certainty:

Obviously this is all subject to change, but that's the basic direction of things as best I could tell.

One interesting note about the Mobile Depots is that they lend themselves to being used as a way to Refit and Resupply in several situations.

For example, a Depot placed on a Gate at a gate camp would allow the camper to refit mid fight based on his opponents.

Also a Capital Ship could potentially use these to refit while fighting.

Example: You drop 5 Dreads on a Tower to reinforce it. All Dreads launch their Depot before going into Siege, then should hostiles come in and primary one of them, he switches out his fitting for Max Tank to soak up as much damage as possible and give his side an edge. Alternatively the Dread could swap some of his lows for Warpcore Stabilizers and simply warp away.

After that we were all getting hungry so we went to the most reliable place to eat at the Rio... Burger King Whopper Bar, which was just a fancy name for a burger king where you watched them make your burger. Still, every time I ate there it was good and it never cost more that $8 bucks for a meal.

Someone in our group expressed an interest to go to the Mittani Roundtable, which was basically a bunch of people sitting around in a big circle asking him questions.

From there it was on to the game room which had about 12 Dust stations, 6 Valkyrie Stations, and then the 5v5 EVE Sit and Go Tournament.

The line for Valkyrie was long and took about 20-30 minutes, while the Dust computers sat half empty most the time. The EVE Tournament was something we wanted to do, but we never felt like waiting for.

Valkyrie was Awesome, and has the potential to be a very good game, or part of EVE Online. 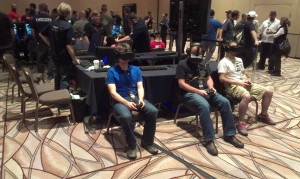 There's not a whole lot of depth to it yet, and that's to be expected at this early stage. I can imagine in the future there being upgrades, fittings, and more objectives.

As far as the experience goes, I will say that it is immersive. You put on the Occulus Rift Goggles and you almost feel like you're there. In fact, I put them on, looked down at my Pilots Legs and then moved my leg to see if the pilot's leg would move!

Once launched from the Fighter Bay, you were sent into space filled with asteroids and large metal beams that acted as obstacles.  At first, lining up your target is difficult but soon you are on their tail spamming your lasers/guns hoping to hit them. Then just as you're getting frustrated that they aren't dying you remember you have Missiles that lock on and you start spamming those.  Once you get those going enemies start dropping like flies.

Clearly the Missiles are a little OP in Valkyrie, but I'm sure they will be nerfed before release.

Overall a very fun game that I could see my self playing just as much as EVE so long as they add depth and consequences to it.

After playing Valkyrie we went to talk about the Future of EVE Online. This talk was basically them saying they really wanted to make Valkyrie part of the EVE Universe (shard) in someway, but refusing to commit to saying they were going to do it. My impression was that they want to do it and are feeling players out to see how they feel about it.

Certainly the mechanics of players flying fighters from Carriers and Super Carriers would completely change EVE Online Capital Warfare, but perhaps if executed properly it could change it for the better?

Overloaded with EVE Online talks we left to go start pregame drinking for the Open Bar Party a few hours later at VooDoo Night Club on the roof of the Rio.

Before heading to the club, I went back to change into some long pants, while leaving my Usurper Alliance T-Shirt on.

Astro and I arrived about 15 minutes early and the line was enormous. It seemed as if it would be an hour or more before we made it up to Voodoo to start drinking and get our free food. Then the line started creeping along and within 5-10 minutes we were 50 stories up at Voodoo. 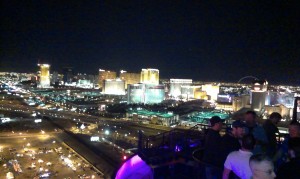 We hadn't ate in a while so we first went for the food, but it only took one glance at the line to see that wasn't happening. So instead we made our way to the outside bar, because the inside bar was swamped.

We then ordered our Vodka Redbulls and slowly reunited Team Usurper near the bar outside.

From there my memory gets blurry and my order of events is no doubt wrong...

I do remember high fiving CCP Rise as he walked by, talking to Andrew Nox again, talking to a guy with a EVE website whose URL I wish I remembered, and some Gents from the previous nights.

Shortly after that we found CCP Fozzie and flooded him with questions and suggestions. At some point a good while later, CCP Fozzie broke our tackle and escaped.

Then, I remember a Hover Round type mobility scooter zooming around with two CCP devs dancing on it and having a great time.

At this point I decide to ask for the best Scotch they have and he fills a glass almost 3/4 full of Glenfiddich 12 year and hands it to me.

Refueled, several of us head for the buffet to get food now that the line had died down. I remember some Ham, Roast Beef, and bread, but nothing else.

Once we got our food we sort of spread out and sat with random people, some happy to have us, and others who sat there uncomfortably awkward as they wondered why these drunk people were pigging out in front of them.

By the time I finished eating it was time for another drink and in a moment of sheer genius I decided to get a Long Island Ice Tea.

It's important you realize that I had been tipping the same bartender for every drink all night long. I was making it rain on this guy, so when he made my Long Island he didn't hold back.

And this friends, is where I blacked out and only small flashes remain...

So rather than attempt to tie my scattered memories into a logical linear progression, I will list them in no particular order:

After that I attempted to text Amorir to find out where he went but my phone was dead, so I decided to go back to the room and plug it in.

When I got to the room and plugged my phone in, I messed up and texted Astro (who was passed out 10 feet away) instead of Amorir.

nvm to drunk going to sleep

One thought on “EVE Vegas… The Epic Weekend Day 3”