In EVE most people like to follow general advice about fitting, damage types, drones, and many other things. I my self have told people on countless occasions to default to Thermal Damage when you can't choose based on target.

But where did these standards come from? Are the even correct?

When it comes to drones the standard advice has been to just use Gallente Drones for high damage unless you need fast drones then use Warriors or maybe Valkyries.

While this advice is simplistic, it does capture some important information and in many cases is the acceptable advice.

But as we all know EVE Online is a highly situational game. Doing the wrong damage type can cost you a fight, drones that can't catch a target are useless, and even drones can have tracking problems.

Over the last month I have been flying the Myrmidon almost exclusively in preparation for a new guide. Because it's a Drone Boat, getting drones right is absolutely crucial.

Some important problems I've noticed from my fights are that people choose to kill your drones about 50% of the time and that medium and heavy Gallente Drones will not track some frigates even if you have them webbed.

Based on this I've varied my drone load to maximize tracking on Heavy and Medium Drones while seeking better HP overall to waste the time of my opponents.

But how does this effect other ships?

When should you use what drone?

That's a very situational question that changes based on the ship you are using and the targets you anticipate fighting.

To help clarify this I've done some spreadsheet work to highlight the Differences and make the choices easier for EVE Pilots.

All stats are Base Stats, which means this is before any skill based bonus or ship bonuses. The actual numbers will be better but since they will vary by pilot I decided to stick to base numbers. 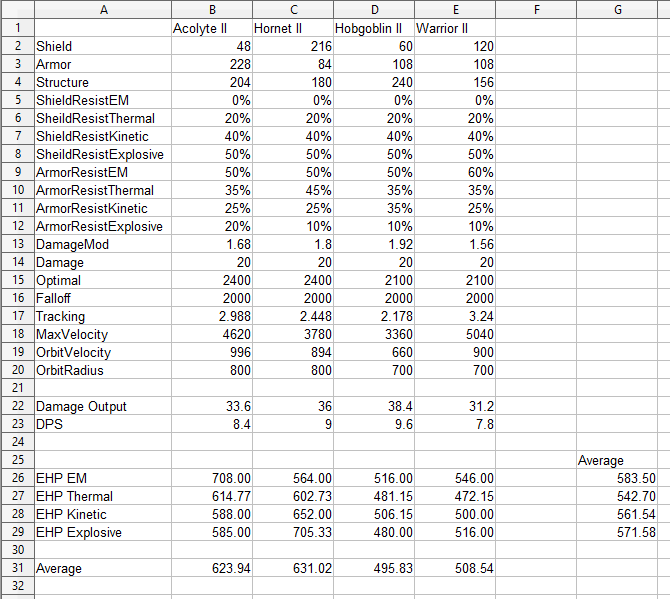 Light Drones are most commonly used by and against Frigates. Which means we can make some assumptions about which ones are the best.

Should you be expecting a Frigate Vs Frigate fight, you have a clear incentive to use the highest DPS Drone, which is the Hobgoblin.

Tracking from light drones should rarely be an issue so we can mostly disregard that.

Speed is only important from fights that start at distance or happen at very high speeds. Meaning that Warriors are only valuable against fast frigates but rarely useful for frigates to use due to low DPS output. However, you can't rule them out completely because in Faction Warfare PVP Gallente Frigates are the most common race and the majority of them run Small AAR or Armor Buffer Tanks which usually have low Explosive Resist. As you can see situational variance rears it's head again.

Across all drone sizes the Caldari Drones surprise, especially since they have historically been the least used drones. As you can see here they have the second best DPS Output, best EHP, and third best tracking.

An interesting variation that breaks with the trends across all drones is the Orbit Velocity of Acolytes. In other sizes the Minmatar Drones have the highest non MWD orbit speed but strangely for light drones the Acolytes are very fast. This along with their third best DPS output and EM Damage type make them very appealing when you expect to fight shield tanks.

Conclusion? Kinetic and Thermal are both good all around damage types. Shield Tanks often have incredible Explosive Resists while Armor Tanks have great EM Resists. Choosing EM or Explosive Damage as your only drones means you will either have to avoid half the fights or be considerably weakened in some.

As a result, if I have a Cruiser or Battlecruiser that can only use five light drones, I am very likely to use Hornets. For my Taranis which relies on killing frigates as fast as possible to avoid being blobbed, I will stick with Hobgoblins. 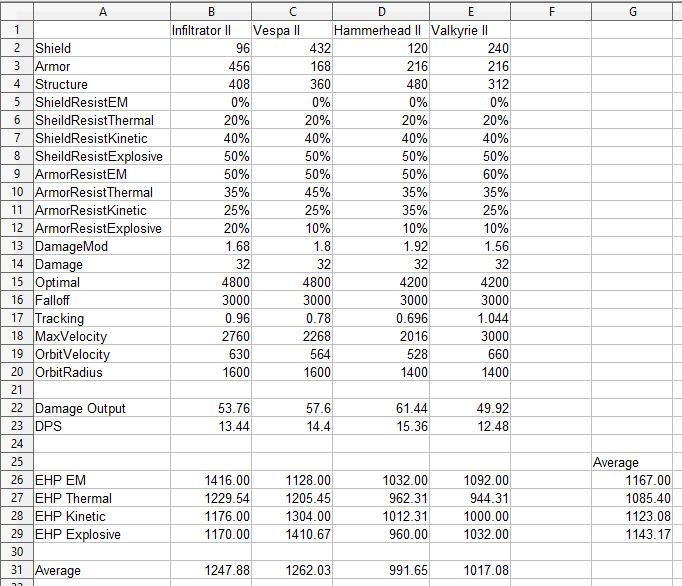 Mediums follow the same trends as lights, however due to their size and the situations where they are used we have to judge them differently.

Some important differences to consider are Tracking, EHP, and Speed.

Hammerheads have long been the standard drone, but in EVE predictability is a disadvantage. Every PVP engagement starts with a set of assumptions. These typically lead players to make good educated guesses about their opponents likely setup and tactics, however these assumptions can also be exploited.

Over the last month of so I've been seeing a trend of people purposefully over tanking thermal damage. It's only been a few times, so it could just be a coincidence, however it could also be that some pilots are exploiting the over reliance on Thermal Damage Drones (Gallente Drones) and the over use of Thermal Damage Type Ammo.

If that is the case I must applaud them. It's a strategy I used when flying the Wolf to combat people using drones since I was able to avoid most ships turrets. By over tanking thermal I was sure to be able to survive much more drone pressure.

So what's the best choice for Medium Drones?

Depending on your situation, they are all valid choices. If you are in a fast Nano Cruiser like the Omen Navy Issue I would suggest Valkyries because you need something that can get on target quickly and be recalled quickly while kiting. However, another very valid choice for the ONI is 10 Light Drones since they are primarily used for anti frigate and anti tackle. If that's the case, then five Warriors and five Hornets is my choice.

For something like a Harbinger that is going be brawling and is likely to engage tackling frigates, you need to consider EHP as a deterrent to enemies killing your drones and tracking to ensure you are able to apply damage to the frigates and destroyers. The best mix of EHP and Tracking is the Infiltrator however as I said before EM Damage is hit or miss. As an example let's look at the Svipul... 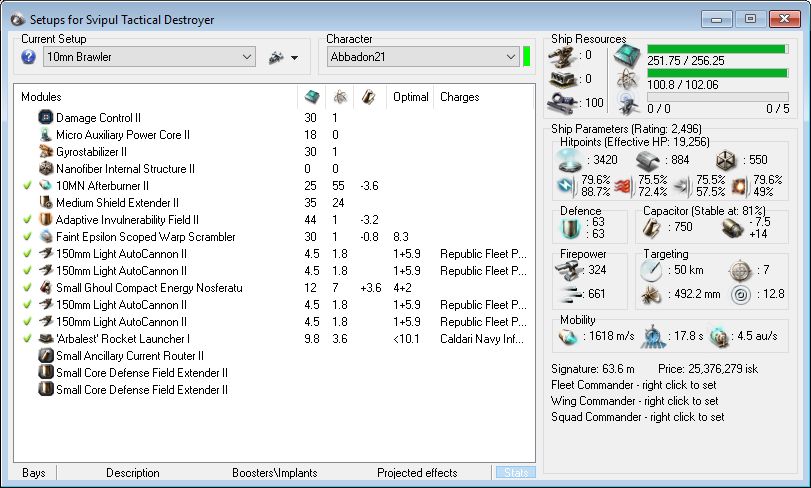 As you can see the EM resists are very high. All resists are solid across shields with Thermal and Kinetic being the weakest. However the highest EHP here is EM followed by Explosive. The lowest EHP (and damage we would ideally do) is Kinetic. Meaning that Vespa Drones would be a great choice against a ship that is very common in EVE.

In conclusion, my advice is to avoid Valkyries unless you MUST have the speed and only use Hammerheads when DPS output is the most important factor for tactics where you need to drop a target quickly and get out.

In all other cases I would suggest people make use of the Vespa or even the Infiltrator as all around drones to improve tracking against small targets and defend against people shooting your drones. 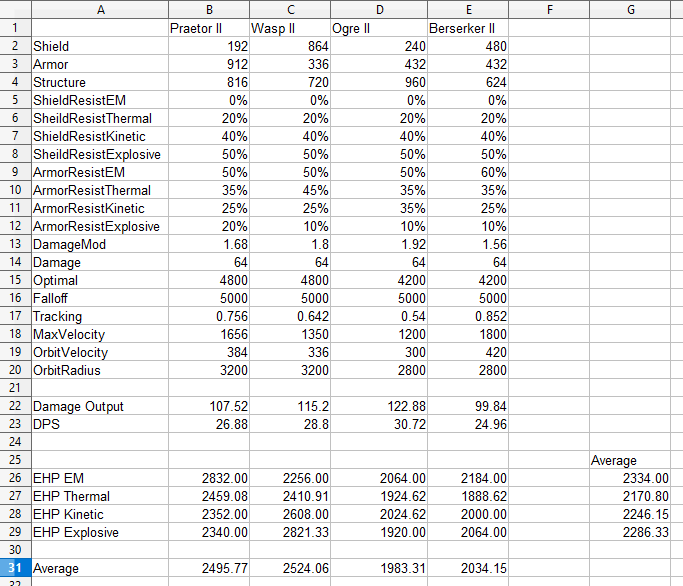 Heavy Drones are least common of all the sizes. This is because the majority of PVP ships in EVE are Battlecruiser or smaller and only a few Battlecruisers and T2 Cruisers are likely to use Heavy Drones.

For PVE (VNI is the obvious poster child) you want to use the best damage for the rats you are killing. That's the only factor worth considering.

For PVP we need to look at what ship is using the drones and what the likely targets are. Battleships that are capable of using five Heavy Drones are likely to be engaging other large targets in fleets.

However in solo situations the most important factor absolutely must be Tracking because EVE's PVP Ecosystem is heavily biased toward smaller ships. This means the obvious choice for a Solo PVPer wanting to use Heavy Drones is the Berserker or perhaps the Praetor. The Berserker tracks better and has a higher speed for both MWD and Orbit Velocity making it the likely best choice.

Finally, you must consider the Gecko, which is what you might call a Extra Heavy Drone since it takes 50m3 instead of 25m3. I didn't include the Gecko in the above comparison because it's price means it will only be used in rare cases. However from a brief look the Gecko is superior to all the heavy drones by two fold or better. In fact the Gecko does more damage than any two drones put together, has more EHP than any two, tracks as well as a Berserker and is as fast as a Berserker. Not to mention Gecko's do all damage types, making them effective across all targets, but never a perfect counter to exploit an enemies resist hole.

Conclusion, if you don't care about ISK or efficiency use Geckos. If you are using Heavies in a Fleet use Ogres or Wasps. Solo PVPers should use the Berserkers.