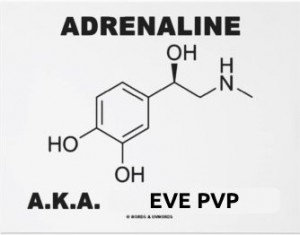 Do you remember your first PVP fight?

Do you remember the rush? The Shaking? The Panic when you started to take heavy damage?

The rush is what hooks and addicts you to PVP but it also causes you to execute poorly.

In this article I'm going to talk about how you can bring that rush under control and not let effect the outcome of your fights.

I remember one of my first PVP experiences. I jumped into a 0.4 system and started searching the belts for ratters with my Directional Scanner. After a few minutes I located a ratting Thorax and the rush began...

I hit warp to the belt at zero and my hands were already shaking. My heart started racing and I started spamming my D-Scan non-stop as I warped in. When I landed and engaged it only got worse... I felt like I couldn't even control the mouse enough click my orbit button and operate my guns.

Luckily, this ratter was a noob and probably panicking more than I was, he just sat there for the first little while not knowing what to do and no doubt trying to warp out. Then as he was deep in armor he started shooting back, but it was too late, he was dead.

This is a common reaction to PVP when you're first getting started and it seriously limits how well you execute.

These days when I PVP I rarely get that rush and when I do it's never as powerful as it used to be. After probably 5,000 fights, I've slowly desensitized my self.

So how can you be "Calm Like a Bomb?"

The same way I got there... You need to get used to it and you need to put less importance on the outcome of the fight.

One major reason for people to get so excited in a fight is because they are flying an expensive ship and losing it would really hurt. They would have to rat for days or more just to replace it.

That's what makes EVE Online different from other MMO games. You actually have something at risk, and the fights are important. You don't just re-spawn in the same condition as you were before the fight.

So one way to reduce the rush, is to PVP in ships that you can afford to lose and not care about. For most people that means T1 Frigates.

The next secret is to get used to the Rush, which means real PVP (not the test server).

So here's what I tell ever noob (and Vet) I run across that wants to learn PVP...

Go get 20 Fully Fitted T1 Frigates and park them in a station near or in low sec. Now over the course of a few days, lose EVERY SINGLE ONE OF THEM!

Don't try to have a good efficiency or win every fight. Try to get as many fights as you can.

Attack every ship you see. Attack Battleships, BattleCruisers, T3's, T2's, and everything else you see.

I can't count the times that I've taken down Battleships and Battlecruisers with a Rifter.

In fact, I have dropped Battleships while using my less than 1 million SP alt in his Rifter!

More often than not you will over estimate your opponent and end up being shocked by his unpreparedness.

11 thoughts on “Calm Like A Bomb – Managing The Rush”