Better Frigates and Some Easy Profits This Summer

My last article was about the changes CCP has already made by making the Combat Brawler Frigates much better. This was just the first step in a roll out of new frigate "classes" CCP is doing this summer.

Here are the Frigate Changes that are coming straight from CCP's Dev Blog:

As you can see the first class is basically interceptors, or dirt cheap alternatives to them. These ships were already being used as "disposable" interceptors and the new bonuses should make "hero tackle" a less expensive job.

The second group looks a little odd because a sniping bantam just sounds ridiculous to me. I'm too used to it being a worthless mining frigate to see it as a combat ship. Kinda like imagining Katy Perry singing Death Metal, it just doesn't compute.

The most interesting is probably the Missile ships. I think with a slight rework the Kestrel and maybe the others have huge potential as Kiting DPS ships in a frigate fleet. Perhaps use the cheap tacklers for tackle and then have the Missile boats apply DPS from 30-50km out.

Finally, the EWAR ships have a lot of potential. The Griffin is already a hugely underrated ship, with more bonuses it will be even better. The Crucifier is being redone to be more like the Arbitrator, which should make for a interesting little frigate. If it gets a full bay of drones it may see DPS outputs over 100dps along with the Tracking Disruption which opens a lot of potential roles for it. The last one of interest here is the Maulus, a boost to it's dampening could make it a great ship to add to fleets to counter logistics and ewar.

These changes won't have the same impact on the game as the Tier 3 Battlecruisers did, but a new line up of Frigate roles will definitely motivate people to play with the Frigate class more and we will see a surge in Frigate Fleets. Personally, I will be analyzing the bonuses to look for fun new solo ships and tactics.

Don't misread this... Because I HATE mining. It is mindless and the worst thing any player could do in EVE with the small exception of those people who really enjoy the idea of building things and get some enjoyment from it.

But there are some big changes coming to the Mining Barges that need to be talked about for both their Profit Opportunity and their importance to PVP. (Attacking a mining barge with the EHP of a battleship would be a bad surprise if you find out it's bait and didn't expect that much EHP)

The ORE frig sound interesting but the Procurer, Skiff, Retriever, and Mackinaw are the most important changes here. Retrievers will become much more capable and their Demand by new Miners will be HUGE. Older Miners will be buying the others in large numbers, the Mack for solo mining, and the other two for "anti-gank" during hulkageddon type events as well as bait.

But What About PROFIT???

The main reason for mentioning all of this is the Profit Opportunity. Before I tell you a virtually guaranteed way to make some easy ISK lets look at what happened to Incursus Prices when it got buffed on May 22nd... 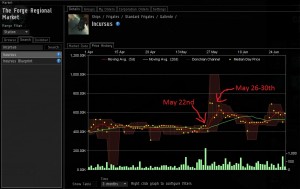 Prices started at about 400,000 ISK or less per Incursus on average on and before May 22nd, then 4 days later (slower than normal) prices for the Incursus jumped to between 600,000 and 700,000 ISK on average (some spikes higher than that). This means that the market traders trading this made a 150% or more ROI on their investment if they bought Incursus' before Inferno and sold them after. Not bad for less than a week long trade.

Prices eventually settled to around 500,000 ISK which is still 25% higher than the original price. The same thing happened to most of the other frigates that got Buffed also and will happen again to the new frigates AND Mining Barges.

Let's talk mining barges for a minute now. The Retriever which I think will lead the Quantity of trades when the changes go live currently sells for around 8-9 million ISK. I predict it's price to jump to around 15-20 million in the week following these changes (happening in the next few months) and then to settle to about 12-15 million for a long time after that. All you need to do to profit is to go out and buy some now at the low price.

BUT there is a catch... These are things that are easily manufactured and if the manufacturers are smart, they will be ready to meet supply, so there is a risk that between them and people like you reading this, the flood of supply could keep prices down. I doubt it, but it's possible. Should that happen I would suggest you wait a few days after the patch to sell your stock because after the initial flood of supply prices tend to rise anyway as inventory gets burned off quickly.

Beyond the Retriever I would be looking at the other Mining Barges, especially the Mackinaw and Skiff because they are tech 2 and supply is a little tighter and harder to replace, meaning prices are far more likely to get squeezed and spike after the patch.

Beyond that, CCP has said that they are planning on making changes to Destroyers at some point, (probably fall or winter) and that they may have some tie in with DUST. This could be a very interesting opportunity as well. However, I wouldn't rush out and buy Thrashers just yet, I have a feeling they will be introducing brand new ships rather than altering the current ones.

4 thoughts on “Better Frigates and Some Easy Profits This Summer”