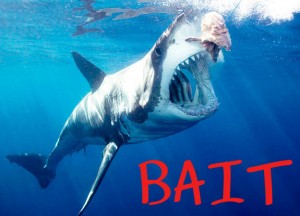 In the past I've talked about Misdirection and how important it is take advantage of your opponents mistakes.

In this article I want to talk about a trick you can use to encourage your opponent to over extend himself and make mistakes you can exploit.

When your opponent believes he's winning, he's more likely to take more risks and further commit himself to a fight.

You and your small gang are attacking a Drake in Null Sec Space. His tank is rock steady and you're making almost no progress, so you decide to disengage because he has just killed one of your Cruisers.

You and your small gang are attacking a Drake in Null Sec. His tank is dropping steadily and he's right at 20% Shield, you've lost one of your cruisers, but you know most drakes go down very fast once they pass peak shield recharge (about 30% shield), so you stick it out and tell your gang to "OVERLOAD!"

Unfortunately, his shield holds steady and he continues to drop your gang, one ship at a time. Only as you are tackled and dying do you see the Shield Boosting effect on his ship and realize it was all a trap.

This is just the beginning. Another example is an opponent or gang that is scared to engage you. They fire at you from range but never come in close and commit. If your tank holds steady they will never engage.

However, should you be in a Brutix and they see you in low Armor, they are likely to run in close to try to finish you off. When they do, you secure your tackle and turn on your Dual Armor Repairs.

...And it's one aspect of EVE that very few games have to this degree. Things like this raise PVP from just "lock target and shoot" to a full on battle of minds.

Because so many fights are "Voluntary" in EVE you MUST learn misdirection to get people to fight you.

If you fly a Thrasher, almost no frigates will fight you, because they know they will likely lose.

If you fly a Moa with small blasters and a web + scram, a lot more frigates will fight you and most of them will die.

If you want to radically improve your PVP, get more fights, and win them, you need to start thinking of how you can use misdirection.